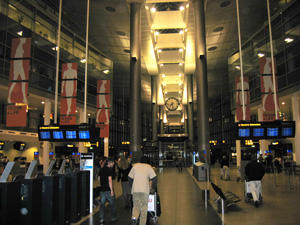 It’s 8pm at home but it’s 5am in the morning now while I am writing this. I woke up unable to fall back asleep. The moon is a crescent above the rising copper dawn. , brushed black silhouttes of ancient rooflines paint the horizon. Breakfast starts in 1 hour so I thought I write a bit.

Our drummer, Rogé and I arrived in Denmark at about 2pm in a bit of daze. We had a 3 hour layover in London at Heathrow which gave me time to buy a power converter and charge up my laptop a bit. It’s almost impossible to get a proper nights sleep on a 9 hour International flight so after the layover and another 2 hour flight to Copenhagen I was beginning to feel a bit light headed.

We took a train across the border into Sweden. I had extra baggage (i brought the vinyl records that Randy will sell at the show plus his guitar and mine) and luckily out European tour manager Alf was at the airport to meet us and to lend a helping hand. Those bags were heavy.
After a short taxi ride from the train station we checked into our hotel

Randy, Mick and their wives were already checked in and met Roge and I in the lobby. 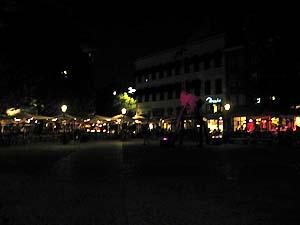 We set out on foot to the Markplatz where a variety of restaurants surrounded the perimeter of the square. The menus were posted at the entrance to each patio and were hard to read at night against a backdrop of outdoor tables lit by candles. Some of us had mini flash lights so after 30 minutes of strolling the square, judging the popularity by the number of patrons we compromised on Italian.

We have soundcheck at 2pm so I might record my first Podcast from there. Stay tuned.