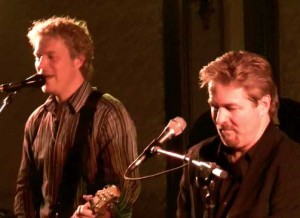 I played a very special gig this past weekend and it may surprise you that is wasn’t the gig with Tal Bachman.

Yes I played a corporate gig at the posh Empress Hotel (now the Fairmont) in Victoria BC and my guest was Tal Bachman. Tal sat in and played a few “Guess Who” tunes with me. He not only played the parts letter perfect, but his guitar tone sounded just like the record.

He sang a few cool cover songs, my favorite being the old T-Rex classic Band a Gong. My first rock concert when I was a teen was Marc Bolan and T-Rex. I remember it vividly because during their set he would use a bull whip on his guitar causing loud, wild uncontrolled feedback.  When that part of the act ended he tossed the whip into the frenzied crowd and wouldn’t you know it - my girlfriend at the time, Marlene, caught it!! I secretly wanted it because she was not a huge music fan, however I’m sure she still has it to this day.

So what was the very special gig? The following day I was invited to sing with bass player David Reimer (Barney Bentall and The Legendary Hearts, Headpins, The Roswells) at a charity fundraiser for Special Olympics. Up close and personal Dave and I strapped on acoustic guitars and ripped through a long set of harmony laden, classic songs. Everything from Badfinger to Blue Rodeo.   Wow, singing as a duo brought back amazing memories of when Donnie McDougall and I used to perform regularly as a duo up at Whistler.

I got warm and fuzzies from watching the “Special Olympics” volunteers clap and sing along. To see the smiles on everyones faces topped off an already wonderful weekend. It was a high point no doubt, but I swear - I’m still singing “She’ So High-ee-ii-eye” in my head days later.