Paul Janz – I Go To Pieces 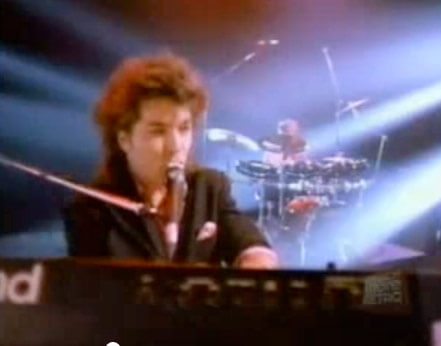 Since the Timeline feature was mandatory for Facebook, my social media coach insisted I go and dig around in my history vaults.

I’ve started with some of the key milestones in my life, one of which was helping Paul Janz, put a Canadian band together. I originally met Paul Janz in Europe when he was touring with a band call “Deliverance”.  They had a song on the radio called “Leaving LA” which was very Bee Gees like.  My dad is a singer and he was touring Russia with Paul’s dad. I had to stay behind in Germany and was invited to ride along with the Deliverance entourage as they toured Germany. When Paul eventually moved to Canada he used me as his point of contact to put a band together.

The Go To Pieces video was directed by David Devine and filmed in Toronto. The record company hired a gal to do wardrobe and she bought me a pink shirt and back combed my hair. I looked like a lion.

Steve Drake (The Odds) opted to get wilder with his pink tank top and beads. I’m glad I got wear my favorite black jacket. The video took hours to shoot and we spent the full day (and more) in that fake smoke. I can still smell that acrid, oily mist that made the lights look so cool. I remember my feet were burning like a hockey player’s in overtime. I had these suede boots on with no ankle support and thin soles. The excitement of making a video was enough to overcome  any minor irritations but it’s funny the little things that stick in your mind.