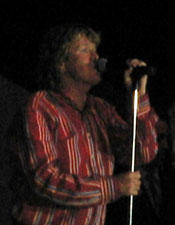 Did a gig with Peter Noone fromm Herman’s Hermits. What a hilarious bloke!
His set consisted of alot of British pop hits from his era. Daydream believer by the Monkees, hits by Chad and Jeremy, Peter and Gordon, the Hollies and more.

The best part was our chat backstage. He is friends with Charlie Watts from the Rolling Stones and with many of the British Rockstars like Eric Clapton. He told an amazing story about his pub crawl with Jack Bruce (the basss player from Cream) and I won’t tell it here because I am going to use it in my podcast.
So stay tuned for “Roadcast” a poidcast from the road. “Something tells me I’m into something Good” 🙂