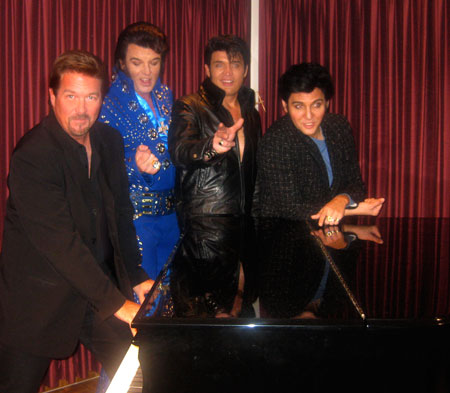 I recently did a tour with some classy fella’s on the Elvis Elvis Elvis Show. I rocked on stage with three of the best Elvis impersonators on the planet. Donny Edwards, Daylin James and Greg Miller, who each play a different era of the King’s career in this world famous tribute concert. What a thrill it was for me to learn and play all of Elvis Presley’s hit records.

At one point in the show when Greg Miller turned to me and asked me play to Can’t Stop Loving You, I got a shiver down my spine and the sudden feeling of what it would have been like to to accompany the king of rock n’ roll. I did a double take and and started the famous Don Gibson classic made famous by Ray Charles and then later by Elvis. Way cool. Stay tuned for an update on a Christmas show at the end of November.

Colin Arthur Wiebe is a Singer/Songwriter, Author, Speaker, and Entrepreneur.

Colin is from Vancouver BC, Canada and has 4 nationally released CD’s and is best known for singing and playing with Canadian legend, Randy Bachman of The Guess Who and Bachman-Turner Overdrive. Colin sings the classic Guess Who hits originally sung by Burton Cummings like they are his own and always receives 5 star reviews. Colin fronts his own band and is a favorite with charities, corporate events and fundraisers.

Colin’s CD “Closer to You” featured the single “Ride of your Life” The emotionally moving song was written for the Canadian Cancer Society’s Cops For Cancer – Tour For a Friend event available at CDBaby.com

Colin’s song “Never Again” is featured in the upcoming film entitled “The Original Promise”. The music video was shot on location on top of Masada in Israel.

Colin Wiebe featured in The Original Promise, a feature length documentary on Israel.

A limited run of Colin Arthur Wiebe’s compilation CD “First Set”, are available now. First Set is a collection of favorites from his 3 previously released CD’s plus a never released bonus track .

Colin is also the founder and President of fastcreative.com, the world’s first virtual marketing department.

Description: Colin is honorary MC and his video “Butterflies in a Jar” is featured at this Black Tie Gala Event. 70’s singer Robbie Dupree and friends also play a set.

Disaster in the Philippines

To understand this story I’ll just post an email my friend Ken McArthur sent out:

While I was sitting on a couch talking to Colin Wiebe on Saturday evening, he received the following e-mail form his virtual assistant in the Phillippines.

The Typhoon has impacted over 1 million people, over 200,000 still need support. and the death toll continues to rise.
DONATE HERE: http://www.purecompassion.org

Sorry for only emailing now.  We’ve been hit by a massive tropical storm and we are under state of calamity. Our house has been flooded, we have no electricity or internet and flood waters are still high. I’m just using my cellphone to try to send you a notice, but will soon run out of battery.

Please give me time to put our house in order. Thankfully none of us are hurt, but many have died in our area. If you know the devastation of hurricane Katrina, you will have an idea of our situation right now.

It’s hard to imagine that a person could be that loyal as to phone and inform Colin why she couldn’t work at a time like this.

That is a testament to the character of these loyal, hard working people. Right now they need food, clothing, blankets money or donations as their local government can no longer keep up with the demand of everyone needing help.

Colin is calling on our jvAlert and Impact communities to band together and without offers, incentives or free stuff help these folks survive.

Together we can do so much more than we can apart. Read the P.S. below if you want to help.

I have worked all week with my friend John from purecompassion.org to coordinate the container contents and there are church Pastors in the Philippines coordinating distribution. I challenge you to mobilize your talent and resources NOW. Your prayers are needed too. We have already shipped 3000 meals, enough water purification packets to cleanse 12,000 litres of water as well as clothing and blankets.

We have the distribution. All we need are more donations to finance the operation. These people work hard for us - let’s show them how we can team up to make a difference!

I saw the Jackson Five on the Flip Wilson television show in the 70’s and they inspired me.

Why? Because the little kid named Michael Jackson sang like a grown-up and it altered my thinking that up until that point, believed only adults could sing professionally. So if Donny Osmond and Michael Jackson could be famous singers so could I. It was a believable pursuit. Today the bar gets higher and higher due in part to shows like American Idol, America’s Top Model and So You Think You Can Dance. Do shows like these encourage the youth of today or wound their self esteem? The answer is, how the adults in their lives help them process the information. Parents of young athletes who encourage their little future hockey or baseball stars to watch professional sports and learn from their heroes help to shape a “can do” attitude. Why is it that parents of singers, and musicians are more likely to say “unless you are amazing you will never make it in the music or entertainment business” ?  Dreams do come true and no matter what you believe, it is detrimental to any child to limit their belief in any way.

This post is not a rant so let me get back to the inspiration of my new song. I heard Marlon Jackson quote his brother Michael’s words and the phrase cought my attention. I quickly wrote it down and and within 30 minutes I had the sketch of a new song done. All Access Members can hear the demo on the demo page.